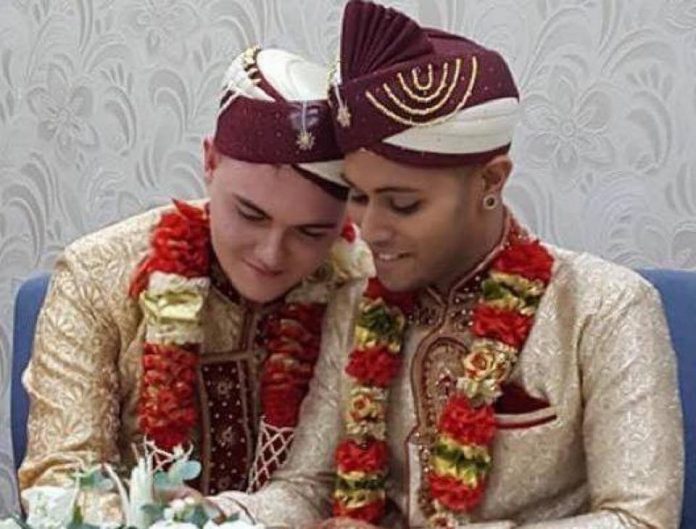 Jahed Choudhury, 24, from Darlaston, tied the knot with his partner Sean Rogan, 19, at a ceremony at Walsall registry office

The couple met in 2015 when Scott found Jahed crying on a bench in Darlaston.

“I’d not long overdosed and I was crying on a bench and Sean came over and asked if I was okay,” Jahed told Express and Star.

“He gave me hope at one of my lowest points and he’s stood by me all the way.

“I tried killing myself, and I then met Sean. The housing association got us a house in a week and we’ve been living together ever since.

The pair tied the knot in a ceremony this week, dressed in traditional Islamic garb.

Sean said: “I’ve stood by him every step of the way. I’ve helped him with everything, and I will for the rest of my life.

“People at the Mosque need to understand about gay people – it’s not wrong, it’s who you are. It’s not a phase.

“I’ve known I was gay since I was six. I didn’t come out to my parents until I was 16, but you always know.

Jahed’s parents did not attend the ceremony: “They just don’t want to see it, it’s too embarrassing for them.

“They think it’s a disease and can be cured, some of my family still call it a phase.”

But the young Muslim is still hopeful for the future: “I want to say to all people going through the same thing that’s it’s okay – we’re going to show the whole world that you can be gay and Muslim.”