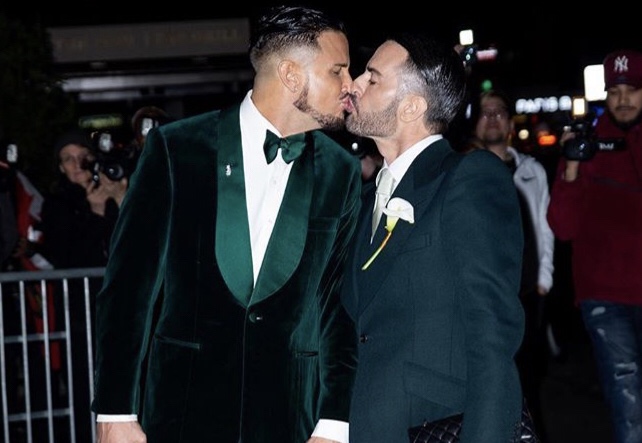 The glamorous couple has been dating for 3 years and got engaged with a flash mob at a Chipotle fast food restaurant last year.

Marc and Char held their wedding reception at a New York City restaurant and among the guests were celebrities and fashion superstars like Kate Moss, Naomi Campbell and Gigi and Bella Hadid.

Congratulations to Marc Jacobs and Charly “Char” Defrancesco who got married today in NYC! ⁣⁣ ⁣⁣ We wish the couple — who famously got engaged with a flash mob in @Chipotle — a lifetime of happiness, love and 🌯 bowls. ⁣ 📸: @lifeinreverie⁣⁣ .⁣⁣ .⁣⁣ .⁣⁣ .⁣⁣ .⁣⁣ #wwdfashion ⁣⁣ #marcjacobs ⁣⁣ #marcandcharswedding⁣ #wedding

Even though the event was kept private from most traditional media, it was well documented on social media by both the couple and their guests.

Our ride. A 1962 Rolls Royce Phantom. Gorgeous. Our attire bespoke @huntsmansavilerow My suit, shirt and tie cut, overseen and designed with the lovely, incredible Ralph Fitzgerald. Charly’s dinner jacket, trousers and dress shirt also cut, and looked after by Ralph. This man has always come thru for us and we love Huntsman. Bespoke sneakers by the incredible @louboutinworld and my boots custom @gucci by the amazing @alessandro_michele

Marc posted an image of an onyx diamond penguin pin, which both he and Char wore.

“Penguins have only one partner and mate for life,” Jacobs wrote in the caption. “A great example of faithfulness and fidelity.”

God is in the details. One of the pair of Art Deco Diamond and Onyx Penguins. An extraordinary beautiful and thoughtful gift to us by the amazing, lovely and generous @zambishot Penguins have only one partner and mate for life. A great example of faithfulness and fidelity. So grateful to you and love you so much dear Fabio.🖤🖤

Jacobs is a prominent fashion designer with his own fashion label, “Marc Jacobs”.

From 1997 – 2014, Jacobs was the creative director of French design house, Louis Vuitton.

Jacobs has won the award for “Womenswear Designer of the Year” from the Council of Fashion Designers of America five times. He was awarded a lifetime achievement award from the same council in 2016.

At one point, Jacob’s had 285 retail stores open throughout 60 countries.

Marc Jacobs has been out as gay for as long as he’s been in the public eye.

On April 4, 2018, Jacobs proposed to model Charley Defrancesco with a flashmob in a Chipotle restaurant. They married a year later on April 6, 2019.