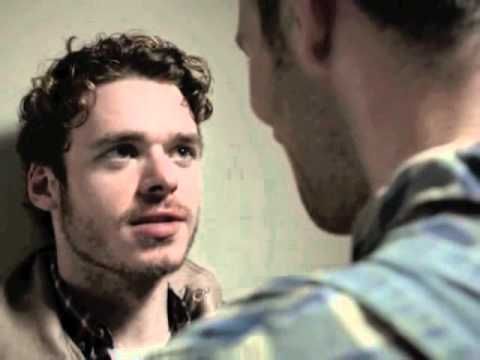 Is there a galactic gay romance between “13 Reasons Why” star Brandon Flynn and “Game of Thrones” star Richard Madden?

Brandon and Richard have known each other since at least November 2018, when photos of them surfaced from a party.

Richard broke up with his girlfriend before Christmas and he and Brandon have appeared at several social occasions after that.

In March, paparazzis snapped a picture of Richard walking Brandon’s dog in LA and according to an article Richard is “crashing” with Brandon in LA while Richard looks for work in Hollywood.

Brandon also recently visited Richard in London where they were spotted watching a play together.

Last week, the two hunks were spotted strolling down the street in LA with their arms around each other.

Related: Elton John Got a Hot Man Greeting for His Birthday

Flynn is an actor best known for playing the role of Justin Foley in the Netflix drama, “13 Reasons Why”.

Before “13 Reasons Why”, Flynn had acted in the off-broadway production of “Kid Victory” as well as several other plays, commercials and films.

Flynn was cast for the recurring role of Ryan Peters in season three of HBO’s “True Detective”.

On September 17, 2017 Brandon Flynn published a post on Instagram that many consider to be an official coming out as gay to the public. Flynn was inspired by a skywriter’s message over Sydney, Australia to vote no for the legalization of gay marriage. Flynn’s angry post identified himself as part of the LGBT community. Since then Flynn has been vocal about LGBT issues on social media.

Related: Sam Smith: I Feel Just as Much a Woman as I Do a Man