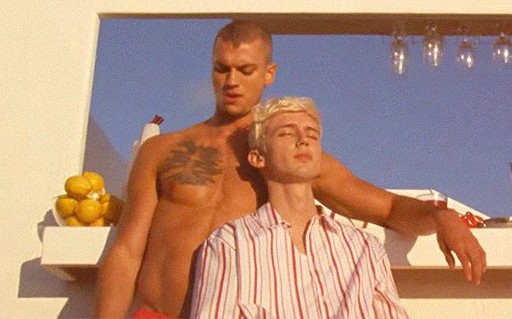 In a post on Twitter, Troye writes that an interviewer from the New Zealand LGBTQ magazine Express asked him if he’s a top or a bottom.

He also asked if Troye’s boyfriend, model Jacob Bixenman, would give him a “hall pass” to sleep with Shawn Mendes.

“I thought about asking the interviewer about his absolute fave sex position after that last question, but then i remembered how wildly invasive, strange and innapropriate that would be”, Troye tweeted.

“Didn’t stop him though!”

I thought about asking the interviewer about his absolute fave sex position after that last question, but then i remembered how wildly invasive, strange and innapropriate that would be. Didn’t stop him though! https://t.co/mo80DziQrH

Troye released a video for his bouncy, summertime ready single “Lucky Strike” from his album Bloom in January.

In the video, Troye is sunning himself on a gorgeous beach and flirting with an attractive beach-stand bartender.

It soon turns steamy – and a bit morbid – as Troye imagines the hunk literally squeezing juice out of his heart.

See the deliciously morbid video below.

Troye is not only happily showing his own homosexuality to the world, he is also fighting homophobia within the music business.

Last year, Troye stated that Eminem’s use of a homophobic slur on his latest album “Kamikaze” was inexcusable

“I don’t think there’s ever really a reason,” the Aussie singer told Variety. “I just feel like some words are not meant for everyone, or for anyone. It’s not that hard to respect that, so I just hope that people do.”

Eminem recently said in an interview that he regrets using the word “f-a-g-g-o-t” to diss rapper Tyler, the Creator on the song “Fall.”

“I was angry when I said the shit about Tyler…in my quest to hurt him, I realized that I was hurting a lot of other people by saying it,” he said.

Troye believes in forgiveness and says forgiveness for actions like Eminem’s is possible, but not without some real work.

Sivan is a singer, actor and Youtuber. He first gained popularity when he appeared on Australia’s Channel Seven Perth Telethon in 2006. He sang a duet with winner of Australian Idol, Guy Sebastian.

In 2013, Sivan signed to Universal Music Australia and released his EP “TRXYE”. In over 55 countries, the EP debuted at number 1 on iTunes.

In addition to several stage performances, Sivan played the younger version of James Howlett in “X-Men Origins: Wolverine”. He is set to appear with Xavier Dolan and Jessica Chastain in “Boy Erased” in 2017.

Sivan told his family that he was gay on August 7, 2010. His family was very supportive. On August 7, 2013, Sivan came out via Youtube Video to his fans and the public. In the video he speaks about how coming out videos on Youtube were a huge resource and inspiration to him when he was figuring out his own sexuality and he hopes that his will contribute to support others on their own journeys.

Many of Sivan’s music videos feature LGBTQ relationships. The video for “Heaven ft. Betty Who” shows footage of LGBTQ couples and events through history.