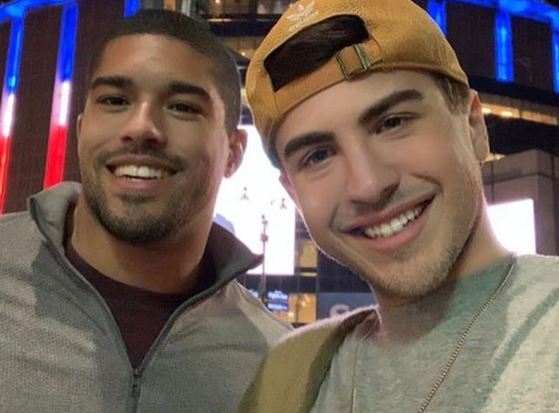 Professional wrestler Anthony Bowens has come out twice; first as bisexual and now again as gay

Anthony opened up about being bisexual in a video on his boyfriend Michael Povano’s YouTube channel about two years ago.

Now the 28-year-old pro-wrestler says he no longer identifies as bisexual and would rather be labeled as gay.

In a New Years greeting on Facebook, Anthony writes:

“..just about two years ago I came out as bisexual which was truely how I viewed myself at the time. However, over the last six months or so I’ve started to less identify less and less with that label to the point where it doesn’t feel like “me” anymore.

“As people move on in their lives, the way they view the world and themselves tends to change and I’m no different. Which is why if you are to label me, I prefer to identify as gay.”

He has also posted a video on Michaels’s YouTube channel where he explains the process he has been going through.

In Attitude’s 2018 Body issue, the 27-year-old athlete/model talked about his journey from a bullied child to pro-wrestling stardom under the name ‘Vigilante.’

Anthony says he turned to pro-wrestling to overcome his crippling shyness, but he feared coming out as bisexual would become his toughest battle.

“I think it was somewhere in the middle of high school”, he recalls. “I was sitting at a table and a couple were walking down the street and I was like ‘Wow that girl’s beautiful.’

However, by coming out as bisexual Anthony faced stigma from both the gay and straight community.

“I didn’t know that there was this big — I wouldn’t say ‘war’ — but discrepancy. Which wasn’t the point of me coming out” he says.

Anthony says he doesn’t care what label people put on him though:

Anthony had no plans on coming out of the closet when he joined his boyfriend in a video on his YouTube channel, but that’s just what happened.

“It was this past fall and I was three months into a relationship with my boyfriend, Michael Pavano. Mike and I had uploaded a video to YouTube on his channel called ‘The Laughing Challenge,’ where he described me as his boyfriend,” he writes on OutSports.

“The video was a blast to do, but I worried that someone from the wrestling world would stumble across it and learn my secret. I decided to let it be posted anyway.”

“My job description is to entertain fans through body language, story lines featuring over-the-top characters and, well, grappling other men dressed in a similar way.”

“Understandably, being openly bisexual could be perceived as a problem. It’s what kept me closeted to all but a few from the time I started wrestling as a pro five years ago. It took a Youtube video to make me see that coming out was not going to be the problem I thought it would be.”

He didn’t think much about until a couple of weeks later when he received a text from a wrestling buddy that made his stomach drop.

“Much to my great relief, he told me he didn’t care and that I was one of his best friends in the business,” Bowens writes.

Encouraged by the positive response, Bowens decided to announce his sexuality to the World on Facebook:

“After hitting send, I immediately turned off my phone. I didn’t want to think about what people would write. After about 30 minutes I told Mike to check his phone,” Bowens writes. “He had the biggest smile on his face, our friends in the room cheered, and I made the decision to turn on my phone. The response was overwhelming positive.”

After his announcementmen on Facebook, Bowens has been sharing tons of cute posts of him and his boyfriend. And we say: Keep them coming. You’re an inspiration!

Who ever said you can't pick up guys at the gym? Lol This was our best attempt of making fun of fitness couples. Happy Valentine's Day @michaelpavano

Anthony Bowens is an athlete and a model. He is best known for being a pro-wrestler and for accidently “coming out” in a goofy video on his boyfriend Mike’s YouTube channel. His wrestling buddies discovered the video, prompting Anthony to come out on Facebook. Fortunately, the reaction from fans and his wrestling collegues was positive.

Anthony Bowens came out as bisexual in January, 2017. He posted this message on Facebook: “I’m not going to make this a long winded post but I think it’s time. Just wanted to let everyone know im Bisexual. I look forward to changing perceptions and breaking stereotypes as I continue on my journey. I have zero patience for negativity so if this bothers you please delete me. Thanks!”