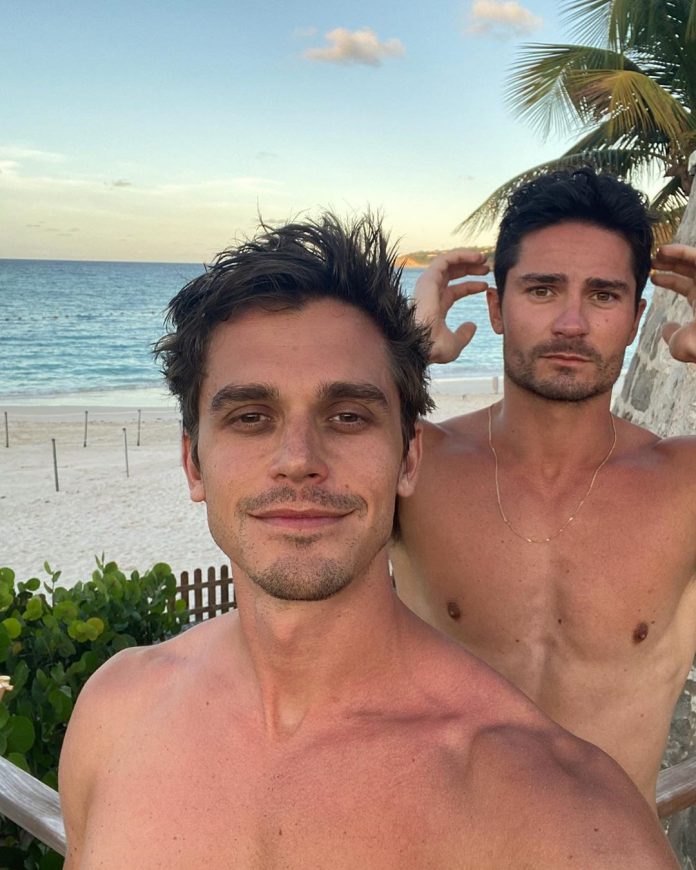 The couple has been spotted at numerous events over the last couple of months and even celebrated holidays together.

Kevin posted a photo of them on Instagram, captioned: “Popcorns (sic) free but you must rewind. Be kind rewind #blockbuster #backfromthedead.”

And at Thanksgiving, Antoni posted a cute photo of the boys at a farm. “Farmsgiving,” he wrote on Instagram.

They have also been on several vacations together, sharing pictures of their adventures (and sexy beach bods) with the world.

stupid is as stupid does

Antoni and fellow TV-star Trace Lehnoff split up in August 2019.

The 35-year-old “Queer Eye” food guru had been dating the “Flipping Out” star for 8 months after the couple met on Instagram.

Antoni later removed all photos of himself and Trace together from his Instagram page, while Trace didn’t delete a single image.

Antoni called Trace “a good boy” on “Watch What Happens Live With Andy Cohen,” and said that the pair met via Instagram DMs.

That time we had dinner under a rocket ship with astronauts.

When Antoni and Trace started dating, Antoni posted some really hot pics of himself in his Calvins to celebrate the event.

“Antoni brought Trace Lehnhoff from Flipping Out to Emmy parties [in September], and Trace was clearly there as his date,” US Weekly wrote about the couple. “They weren’t trying to hide it. They met on Instagram.”

Antoni split from his longtime boyfriend Joey Krietemeyer in 2018.

Antoni and Joey were together for more than seven years and the foody has previously credited Joey for helping him come out to his family.

“Antoni and Joey broke up months ago,” a source close to the star revealed to US Weekly in October. “It was very amicable. They’re still friends. It was a clean split.”

Evidence that sometimes we’re ok with not having General Tso’s and pork egg foo yung in our pjs on a Saturday and instead opt for being around other humans in a social setting in (mostly) clean clothes. Thanks C for not judging as we left at 11 w a doggie bag of PB blossoms for the Uber ride home. 📷 @carsonkressley

Antoni Porowski is a chef, actor and TV personality. He is best known as a one fifth of the “fab five”, hosts of the Netflix makeover show, “Queer Eye”.

After graduating from university, Porowski studied acting at the Neighborhood Playhouse School of the Theatre in New York City. He appeared in the movies “Elliot Loves”, “Daddy’s Boy”, “The Pretenders” as well as an episode of the TV series “The Blacklist”.

The “Queer Eye” cast were the recipients of a Daytime Emmy for Outstanding Structured Reality Program in September 2018. Porowski signed a deal to write his own cookbook and has also announced that he will be opening his own restaurant in New York City.

Porowski has stated that his sexuality is fluid. He and ex-boyfriend Joey Krietemeyer were in a relationship for 7 years.

Porowski says that growing up in the liberal city of Montreal, Canada sheltered him from homophobia and predjudice in comparison to his cast mates. Porowski admits he is often perceived as straight, which has also contributed to his more “sheltered” queer experience.