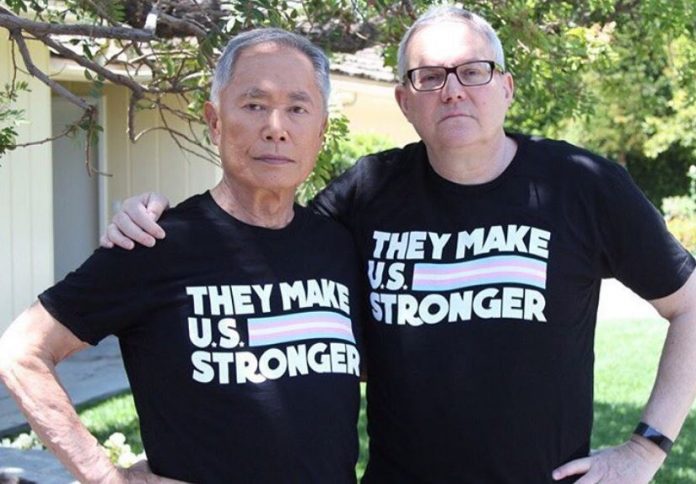 Gay actor and activist George Takei, best known for his role as Sulu on “Star Trek,” says Trumps plan to eliminate the “transgender” category is part of broader plan

George’s tweet came after The New York Times broke news on Sunday, Oct. 21 that the Trump administration is considering a legal definition of gender that would no longer recognize transgender people.

“Trump wants his followers panicking. The trans / immigrants / mobs of women are out to get them, he bellows,” George tweeted.

“He turns up the heat, but we turn out the votes. We Dems are cool, determined, and laser-focused on flipping the House and many governorships. #BlueWave.”

Trump wants his followers panicking. The trans / immigrants / mobs of women are out to get them, he bellows.

He turns up the heat, but we turn out the votes. We Dems are cool, determined, and laser-focused on flipping the House and many governorships. #BlueWave

Want to go on a double date? I want to fly you and a friend to NYC for a night on the town with me and Brad! Support an amazing cause & ENTER by clicking the link in my bio or visit omaze.com/nyc. Every entry supports Inspire Change Broadway’s mission to give youth access to theater! Hotel and flight are included in the prize package.

George Takei is an actor, most recognized for his role as Hikaru Sulu in the original “Star

Trek” television series from 1966 – 1969. Since then he has reprised his roles in several other productions within the “Star Trek” franchise including “Star Trek: The Animated Series”, “Star Trek: Voyager” and six “Star Trek” feature films.

He has appeared in the television shows, “Heroes”, “Star Wars: Clone Wars” and “The Apprentice”. His work in theatre includes a production of Dustin Lance Black’s play, “8” in support of the American Foundation for Equal Rights. He also starred in the musical, “Allegiance” in 2012, based on his own experience as a child in a Japanese American internment camp during the Second World War.

He has a vast social media following and attends fan conventions such as “Comic-Con” regularly. He was inducted into the Hollywood Walk of Fame in 1986.

Takai came out publicly in an interview with “Frontiers” magazine in October 2005. The article announced that Takei was gay and in a committed 18 year relationship with his current husband, Brad Altman. He describes his own experience of coming out as long process.

Many of Takei’s fans have been aware of his sexuality since the 1970’s, as Takei never hid his memberships or support of LGBT organizations and causes. Takei is an activist for gay rights and a spokesperson for the “Coming Out Project” with the Human Rights Campaign. He received the GLAAD Vito Russo Award in May 2014 for his contributions as a media professional promoting equality for the LGBT community.