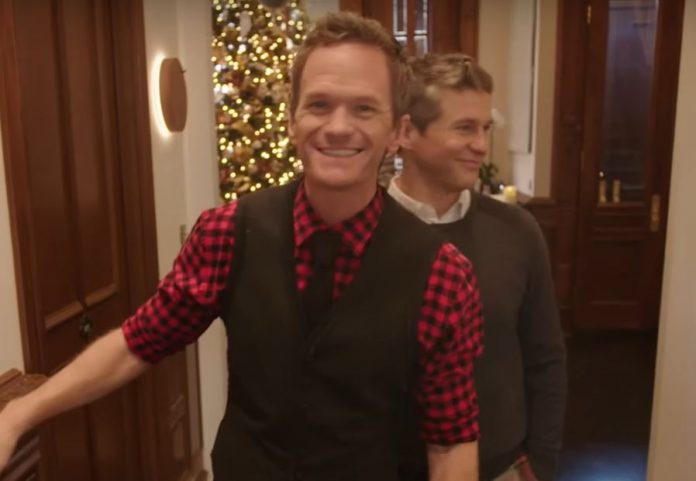 Neil Patrick Harris and David Burtka have given Architectural Digest a tour of their lavishly decorated home in Harlem, New York City.

“We’ve been together for over 15 years, which is a lot of holidays,” Neil Patrick tells AD. “And every holiday you wind up buying a throw pillow, a new Nutcracker, or something. And we’ve kept it all.”

“That’s what I like about Christmas, the time spent putting it all together,” he says.

Neil Patrick and David became parents to twins Gideon and Harper in 2010 and love incorporating memories of the kids growing up throughout their home.

Photos of the twins are everywhere and and many ornaments on the trees were made by the kids.

The couple throws an annual Christmas bash in their music room which ends with a White Elephant gifting.

“I love hosting games,” David tells AD. “It’s a very friendly one and everyone brings an expensive-ish gift so that everyone is relatively happy. The holiday party, for us, is a good opportunity to get to reconnect with people that we haven’t seen in a long time.”

Earlier this year, Neil Patrick was the international ambassador for Tel Aviv’s Gay Pride Parade and headlined the city’s annual celebration of its famous gay-friendly scene together with David.

“Pride. Love. Life. Thank you for having us as International Ambassadors #telavivpride, the outpouring of positivity was truly overwhelming. #grateful @dbelicious 🏳️‍🌈,” Neil Patrick wrote on Instagram.

The “How I Met Your Mother” star is by many seen as something of a gay icon but says he doesn’t see himself that way.

“I’m just a guy who is married to another guy and we have kids and we live our lives I would say as ‘normally’ as one would. But I think normal is a very subjective term, especially in the gay community,” he told The Associated Press.

“I legitimately have no interest in being a representative or an ambassador for anything except my kids.”

Pride. Love. Life. Thank you for having us as International Ambassadors #telavivpride, the outpouring of positivity was truly overwhelming. #grateful @dbelicious 🏳️‍🌈

What a way to end my 45th year..! Truly inspiring to see so many people putting differences aside and celebrating diversity and inclusion and love. The power of pride was/is overwhelming. #telavivpride #grateful 🏳️‍🌈❤️🏳️‍🌈

Neil Patrick’s “normal life” includes hanging out with guncle Elton John, like the family did when they went to one of the pop icon’s concerts in December last year.

The concert at New York’s Madison Square Garden was the last stop on Elton John’s farewell tour and was the first ever for the kids.

‘We are beyond grateful to consider this artist and genius a friend. His husband is remarkable, his children divine. Thank you for the spectacular memories, good Sir’, Neil Patrick wrote on Instagram.

Can’t stop thinking about watching Elton at @thegarden last week. Kids’ first concert, Elton’s last. We are beyond grateful to consider this artist and genius a friend. His husband is remarkable, his children divine. Thank you for the spectacular memories, good Sir. 😘 Swipe left for more photos of our night. @eltonjohn @davidfurnish @dbelicious

Neil Patrick, David, Gideon and Harper were hanging out with Elton backstage before enjoying the concert with his husband, David Furnish.

The two families have been close for some time and went on holiday together to St Tropez earlier this year.

Harris is an actor, singer, writer and producer. He is known for playing the teen doctor, “Doogie Howser, MD” on the American sitcom of the same name. Harris is most famous for playing the role of Barney Stinson on the hit sitcom, “How I Met Your Mother”.

Beyond TV, Harris has had success on the stage, winning the 2014 Tony Award for his lead role in “Hedwig and the Angry Inch” on Broadway. Harris has since hosted the Tony Awards four times, the Primetime Emmy Awards twice as well as the Academy Awards in 2014.

In Harris’ 2014 memoire, “Choose Your Own Autobiography”, Harris recounts years of telling people he was bisexual before coming out as gay in Hollywood.

Harris came out to the public as gay on November 4, 2006, saying, “I am happy to dispel any rumours or misconceptions and am quite proud to say that I am a very content gay man living my life to the fullest”.

Harris is married to his long time partner David Burtka. The two are parents to twins, Harper and Gideon.