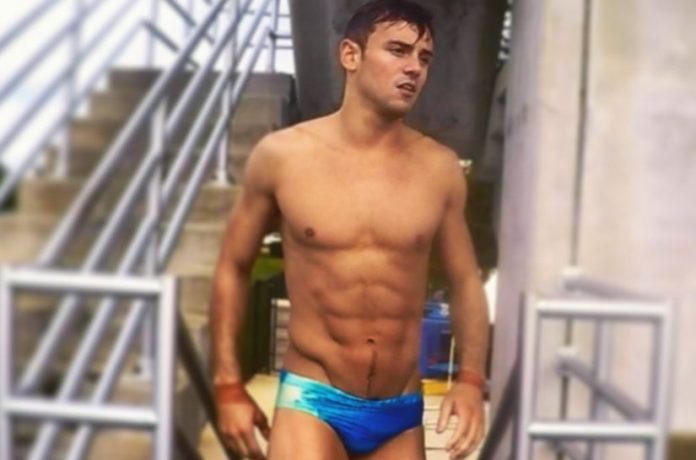 “I’ve been nominated for @Eurosport_UK British sports star of the year! 😱 here’s where you can help me out with a cheeky vote,” Tom writes on Twitter.

Writes Eurosport about the nomination, “Daley put his Olympic disappointment behind him with a fearless victory at the World Championships.

“The 23-year-old secured 10m platform gold with a total that would have won in Rio.”

I've been nominated for @Eurosport_UK British sports star of the year! 😱 here's where you can help me out with a cheeky vote 😉 https://t.co/8wpzEAnY5O pic.twitter.com/vzSiD3X7VO

Go vote for Tom at http://lebuzz.eurosport.co.uk/polls/vote-eurosports-british-star-year-34292/

In August 2017, Tom and husband Dustin Lance Black went on an adventure trip to Hawaii, just weeks after a very romantic honeymoon in Barcelona.

Tom and Dustin wed in England’s beautiful southwestern countryside back in May 2017. They later released a video from their wedding ceremony.

Tom Daley has said that he fell in love with Dustin Lance Black just minutes after meeting him and Dustin has admitted it was the same for him.

Dustin Lance Black is a screenwriter, director, film and television producer and LGBT rights activist. He won a Writers Guild of America Award and an Academy Award for the 2008 film ‘Milk’.

Tom Daley is a British diver and athlete. He is best known for winning the 2009 FINA World Championionship in the 10-metre platform event at the age of 15. He won the bronze medal at the 2012 London Olympics, before becoming a World Champion again in the event in 2017. Daley also won a second Olympic bronze in the men’s synchronised 10 metre platform, with Daniel Goodfellow, in Rio.

Tom Daley came out as gay in December, 2013. Daley beat the tabloids from outing him by coming out on his own YouTube channel. In a video, Daley announced he had something to say: he had fallen in love, and it just so happened to be with a guy.